Memorial Tribute to Louie Bellson by The Musician's Warehouse Big Band at the AT&T San Jose Jazz Festival in the San Jose Repertory Theatre. The TMS band is seen here performing: "The Intimacy of the Blues".

Louie Bellson had performed frequently with The Musician's Warehouse Big Band, under the directorship of Terry Loose, also a drummer.

Here Bellson is shown with the band at an earlier San Jose Jazz Festival (2006).

Louie was a faithful member of Emmanuel where he was baptized and married Mrs. B.  He played there frequently, including presenting his "Sacred Music" Concert at EBC, 3/1/02. 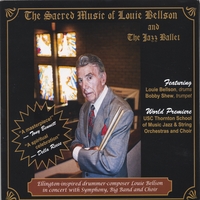